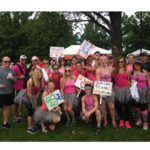 Two years ago my entire world change. I was a happy, healthy, 25 year old who enjoyed the outdoors, staying active, going to concerts and hanging with my friends and family. I was experiencing odd changes with my body like my hearing being clogged and also a sporadic numbness on the right side of my face. I had read that the numbness could be the result of a pinched nerve so I made an appointment with a chiropractor to take a look. At my appointment, a few flags were raised because of how stiff my neck was and also the facial numbness. He ordered me to get an MRI before he would adjust me, which thank goodness he did otherwise my story could have been a lot different.

It took about a month for my insurance to approve the MRI and I ended up scheduling my appointment for Christmas Eve 2014. I arrived for what I thought would be a quick MRI of my neck and spine. They let me know that they had changed my scan to be a brain MRI because of my symptoms. At this point, I wasn’t very concerned because I was more eager to have the MRI done so that I could get adjusted at the chiropractor. About 30 minutes into the MRI, the technician came into the room and said they wanted to add contrast so they could see better. I wasn’t really sure what this was, but the next 30 minutes in the MRI machine had my mind racing as to why they needed to see better and what it was they were looking for. The MRI finished and I was of course in a hurry to leave because my appointment had run long and it was Christmas Eve, but the look on the technician’s face was heartbreaking. She was trying to be strong, but her face was giving her away. She asked me to go sit in a room and wait for the radiologist because he wanted to talk to me. I sat in there alone and confused about what was going on. Then it happened…the radiologist came into the room and told me that they had found a mass in my brain and recommended that I go to the ER right away. I was so confused and I didn’t understand what any of this meant. The hardest part was that I was felt fine and seemed healthy. Why did I need to go to the ER? That’s where sick people go.

Well, the ER was equally confused when I walked in looking fine and handed them a disc. I said “the MRI place said I needed to come here…I don’t know why though.” Four hours later, a neurologist was showing me on a computer that I had a Brain Tumor. Not only did I have a brain tumor, but I had a BIG ONE. My tumor was about 4CM (size of a large plum) and had been growing for years. The first thing I could think of when he was telling me this was…I have Brain Cancer? I had never known anyone who had a brain tumor and all I could think about was the worst and what you see in movies. I didn’t understand how I was sick when I felt fine, but just had a few odd symptoms. They had me complete a variety of tests, very simple things like walking in a straight line, following his finger, vision tests, hearing tests and to my surprise I failed all of these. For years, I had written each of these things off because there was a reason for everything. My balance was bad because I was clumsy, my hearing had gotten worse because I went to a lot of concerts, and my vison kept changing because I sit in front of a computer all day at work. Never did I think all of these things were because I had a large tumor pressing on my nerves. The type of tumor I had was a slow growing tumor so for it to get as large as it did means I had been living with it for up to 10 years. The doctors were surprised I was functioning as well as I was because my symptoms should have been a lot worse at this point. They believe that my body had learned to adjust and function with the tumor, but it was now pressing on my brain stem, which was causing a lot of problems. They gave me six months to live if I didn’t have the tumor removed…SIX MONTHS. I wasn’t sad or angry at this point, but in a daze of confusion.

Fast forward two weeks and I was in the Baltimore, MD at Johns Hopkins Hospital getting ready for surgery. Once diagnosed, my family and I started searching for the “right” surgeon to remove my tumor. I needed it removed as soon as possible, but not urgent enough that I couldn’t take a few days to find the right doctor. I met with five surgeons, all in different states, who were referred to me by a neurosurgeon who consider them to be experienced in removing Acoustic Neuromas (the type of tumor they believed I had). That is my biggest suggestion when anyone asks me for medical advice. Find the right doctor for your situation. There are over 140 different types of brain tumors and they are all different. Find a surgeon/team that specializes in removing your specific tumor because this is your life and there are no do-overs in brain surgery. I think it’s important to also find a surgeon/ team you feel good about because they are going to be in your life for a while. I removed a possible surgeon from my list after I met him, not because he wasn’t experienced, but because I didn’t connect to him. It’s ok to be picky when it’s dealing with your life.

On January 6th, 2015, I had a 13 hour brain surgery to remove my tumor. My neurosurgeon along with an ENT was able to remove the entire tumor, but unfortunately there were several setbacks. Like all surgeries there are many risks, but I personally believe brain surgery comes with several more risks because of the location of the surgery. To be able to remove my tumor, which was wrapped around my hearing nerve meant that I would lose my hearing in my right ear. There was no way around this if the tumor was to be removed. Not only was the tumor wrapped around my hearing nerve, but also my facial nerve and balance nerve. My team worked extremely hard to preserve all of these nerves because further damage could mean devastating results. The nerves were all kept intact (except my hearing nerve), but they were so damaged from years of having a tumor on them. I woke up to being deaf in my right ear, the right side of my face was paralyzed, the vison in my right eye was about gone and I had extreme vertigo. My initial recovery took about three months to get back to about 80%. For the first month I was unable to take care of myself and had to rely on my family for everything. I wasn’t able to do basic things on my own (stand, shower, etc.). I slept a lot because I was in so much pain and I was very sensitive to noise and light. I got a little better each day and I credit a lot of my recover to my family and my physical therapist. I was in PT for about 1.5 years and it was terrible! I had to re-learn to walk, balance, track with my eyes and do basic tasks without becoming dizzy. I still suffer from vertigo, but it’s a complete 180 from two years ago.

Since my brain surgery I’ve now had three additional surgeries and several procedures. We’re working to restore the movement in my face, but that is not an easy task! I’ve had two nerve transfers, a platinum weight added into my eye lid, my neck muscle cut, and will be having a muscle transfer from my leg later this year. Losing my hearing and having vertigo are not fun, but having the right side of my face paralyzed has been very difficult. You don’t realize how many factors are controlled by your facial nerve (speaking, eating/drinking, swallowing, closing my eye, smiling, producing tears to keep your eye from being dry), but one of the hardest factors is being able to control your expressions. I’m not able to display when I’m happy, sad, or upset because my face doesn’t change expression. Having a brain tumor is something I would not wish on anyone, but the side effects from the tumor have personally been the worst for me. I can manage the pain, surgeries, and bad days, but having no control in the moment in my face has been very difficult.

For now, I am tumor free and continue to live my life and fight every day because even though I did not ask for any of this, I won’t let it break me and stop me from living my life to the fullest.